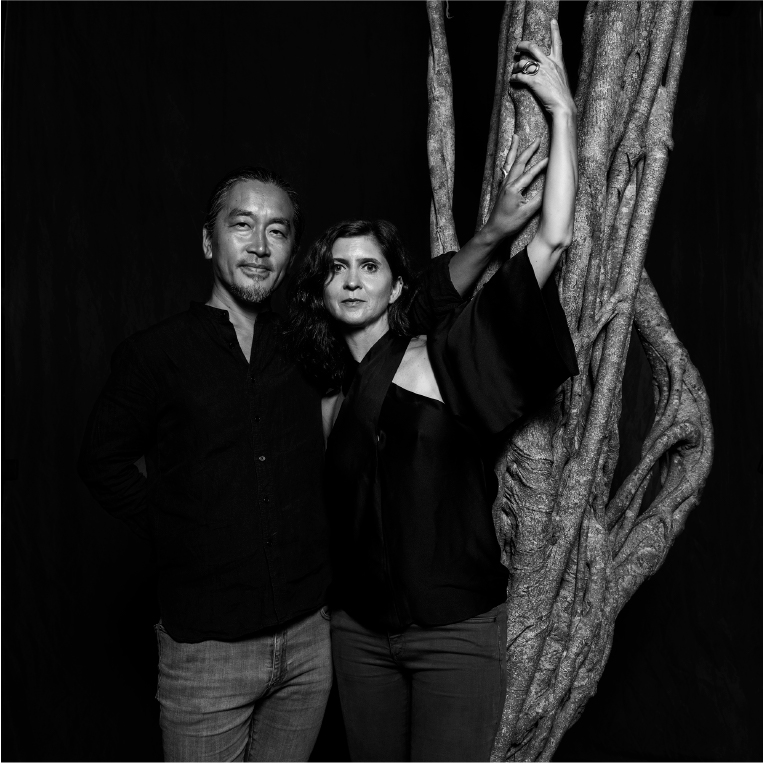 Lucille Reyboz
Photographer. Born in 1973, Lucille Reyboz began her journey with photography in Africa, where she spent most of her childhood, and discovered Japan in 1999, invited by Ryuichi Sakamoto to collaborate on his opera “Life”. A portrait photographer, Lucille Reyboz also produced numerous record covers for labels such as Blue Note and Verve. While developing a prolific photography practice, she exhibited her work around the world, most notably in Visa pour l’image (2001), Phillips de Pury in New York (2007) and CHANEL NEXUS HALL, Tokyo (2011). She published several books, including Batammaba by Gallimard, Source, Belles de Bamako and Impressions du Japon with Keiichiro Hirano by Editions de la Martinière. Lucille Reyboz now lives and works in Kyoto, where she co-founded KYOTOGRAPHIE with Yusuke Nakanishi in 2013.

Yusuke Nakanishi
Lighting Director. Yusuke Nakanishi was born in 1968 and is a lighting artist who travels the world, and expresses his impressions of light and shadow from his memories. He has worked as a lighting director for feature films, stages, music concerts, fashion shows and interior designs. He also created the Eatable Lights object series, and has exhibited installations at the Hara Museum, the School Gallery Paris, and Nuit Blanche Kyoto.

Ousmane M’Baye is a Senegalese craftman and designer who draws on the richness of his cultural heritage to re-invent contemporary furniture and objects where the aesthetic and practical combine.​ Self-taught, he constucts colourful, geometric shapes, full of metallic reflections.

A project started in 2010 named “miso” named after a unique ingredient widely known all over the world, with a wish of staying familiar while working globally. miso specialises in all aspects of design, from graphic, to interiors and architecture. Miso has worked as a scenographer for KYOTOGRAPHIE exhibitions since 2013. For DELTA, miso worked on DELTA Cafe's interior and with Kazuya Morita designed DELTA STAY.

Sfera, based in Kyoto and Milano, started in 2001 by a creative director Shigeo Mashiro, sharing the concept of a new lifestyle in modern times.
Sfera’s handiwork of artisan is highly recognized at home and abroad. Sfera building in Gion’s south area adjoins a cafe, a selected concept shop, and a gallery. The appearance of the Sfera building catches the eye from its unique spirited Swedish appearance, placed among the antique shops famous in this area. For DELTA, Sfera produced new ceramics and cutlery with Lucille Reyboz and Yusuke Nakanishi.

Miura Lumber located in Kyoto works on an ecological design by using local woods, solid woods, and natural materials. The products by Miura Lumber utilize the warmth of the material itself. At DELTA, we will serve our charcuteries appetizer with a custom-made cutting board made of Japanese Pagoda from Kyoto.

Bang & Olufsen the audiovisual brand started in Denmark, 1925 provides the sound in DELTA. The quality of the sound range and sound reproduction is outstanding. The sophisticated production of the speakers is famous all over the world. KYOTOGRAPHIE's sound has been sponsored by Bang & Olufsen since 2019.